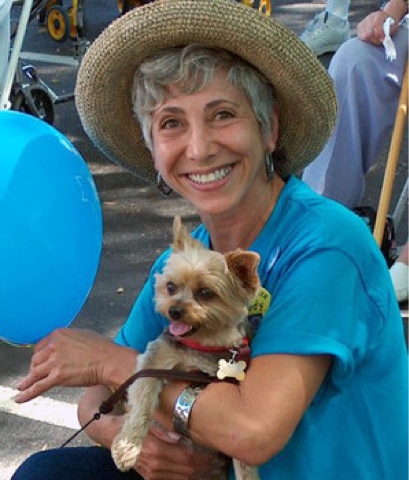 I was captured by the story of
Judy Salamon of Oakland whose life was  tragically
Snuffed out by a bullet July 24, 2013

Judy was part of a unique, caring and tight mixed-race , small, idyllic community surrounded by the ‘killing fields’ of East Oakland. It’s a community of middle age , liberal folks who care about Oakland and the middle class community they live in, and chose to settle in the old, tree lined and charming Maxwell Park district rather than running to the safer suburbs like so many others in their demographic. Many were scholars at nearby, historic Mills College – now heavily gated – and wanted to remain part of that community, too.

Salamon’s IS a story of a woman , who had done the corporate thing , been married and divorced , and decided to downscale her life and do the humanitarian things she loved, even if it involved risks.  That would be caring for animals, walking dogs, placing pets in new homes and , generally looking after these furry friends who don’t have the voice of humans all amidst one of the highest crime areas in the nation. However, the tight knit community had been relatively crime free with its neighborhood association and neighborhood watch. The ‘random’ killing has shocked and re-awoken this sometimes idyllic neighborhood and shows that, perhaps , the floodgates of violence here can no longer be held back.

Sixty-six year old Maxwell Park resident Judy Salamon was driving through the nearby Fairfax District when she was fatal wounded by gunfire on Wednesday, July 24, 2013. Maxwell Park and the Fairfax District adjoined neighborhoods in Central East Oakland, situated on the opposite side of High Street from Fruitvale. Around 10:00pm, neighbors began gathering on Fern Street between Fairfax Avenue and Brookdale to hold an impromptu vigil in her memory where she died just outside of Home of Peace, a 115 year old Orthodox Jewish Cemetery. Neighbors gathered to light candles, leave flowers and other mementos, and share stories of the well-liked woman, who was best known as an animal lover.

Judy, ironically, was driving past the Home of Peace Cemetery, a 115-year old Jewish Cemetary, when she was killed.

Her gentle spirit was also evidenced in her communications with her neighbors.

Several remembrances spoke to Judy’s real love and concern for the animals for which she cared. One man noted how she would even nap with his pets to comfort them while their owners were away on vacation.  as a pet lover , myself , I know how certain people may take to pets and their unconditional love they can’t always get from even their own human friends.

“Six years ago, my husband &amp;  I took our daughter trick or treating for her first time,” recalls neighbor Yvette Santiago. “We stopped at Judy’s and she didn’t realize it was Halloween, so she didn’t have any treats. She would NOT let us leave and would not let our daughter walk away empty handed. She said she didn’t want to disappoint her, went rummaging around her house and came back with cash! We insisted that wasn’t necessary of course but she wouldn’t have it any other way.”

Maxwell Park is a close-knit community which has a very active neighborhood watch and whose community members have actively worked to take back the local park for children, with a mosaic tile project each summer over the past five years.

Judy Salamon may have walked past the cemetery, nearby Courtland Creek Park, and the spot by the cemetery where she died numerous times in the course of her more than fifteen years as a pet sitter and dog walker. She was active in animal rescue, and trying to place pet rabbits when she died.

“I never got to meet Judy, but I feel like I knew Judy from her always thoughtful and kind postings, her love for animals, and her knowledgeable and sensible advice on dog training,” wrote Rachael Emilie, a member of the Melrose Park email list.

In the wake of her death, residents are looking for other ways to honor her memory. A second candlelight vigil is planned for tomorrow night, and there is renewed interest in hiring a security patrol, something Ms. Salamon favored which some residents believe might have saved her life.

Judy could have been my sister, Joan ( or myself for that matter), who passed 12 years ago of cancer. She was the same age as Judy.  Joan also loved pets and  was an extremely kind, innocent who had been taken advantage of by people and turned to her dogs for unconditional love, which she gave back to them.

I was honored to care for Pucky and Roscoe  for four bittersweet years after Joan passed –  in effect extending her life living through her dogs.  I could have also been Judy, having had similar disappointing life experiences, often   let down by humans.  I find myself turning to my pets, now, more and more. Currently, I am caring for my wonderful cat, Weepy, who, re cently,  has perhaps miraculously bounced back (for now) from a double whammy of kidney and heart failure . We savor everyday of life. 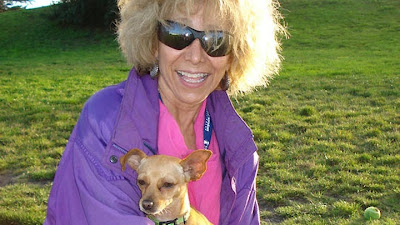