Maybe, this is a figurative way of showing why Ornji was so special to me. Not being a bit of an ‘outsider’ myself, Ornji did things  his way – and it was good.

Below is a little tribute to both Ornji, who we lost last Friday nite, 2-24-17, and his big, older , brother, Zack, who is missing Ornji but stepping up his diet , via below tricks now that Ornji’s food is no longer omnipresent to steal.  These videos were recorded in 2014 , the first exactly three years ago (2-22-14) when  Ornji was still an outside cat living out of the basement;   he impressed me with his penchant to prefer the popular path back to his room for the one less traveled, i.e. large rocks. Probably another reason I took so well to Ornji – another ‘outsider’.  Zack is another story, another outsider we’re still fortunate to have with us and still attempting to take off some of the weight he gained early after he nearly died as a foreclosed cat who caught fatty liver disease living in the cold – until we rescued him; then, it was just trying to get Zack to eat; he not only survived but ended up eating TOO well – and it’s very hard to get it to come off once they’ve gained that much. But we’re still working on it some five years later


Zack cat does, while earning his food.  Zack is 26 pounds, down from 28 and biggest cat in the Eastbay,  they say, since he got sick and later put on (too much) weight while recovering (see last video below) …but, first,   here’s Ornji, who takes the path less traveled…

Some claim to walk on water… Ornji walks on rocks…
CLICK video but be patient while Ornji decides to ‘perform’
See the full story of the Life and Times of Ornji, our special FIVcat we are now mourning since
he finally succumbed to liver cancer 2-24-17 but only after a brave, long fight which included a house fire.
‘FAT’ ZACK CAT WORKS FOR HIS FOOD –
PET DIET TRICKS and TIPS 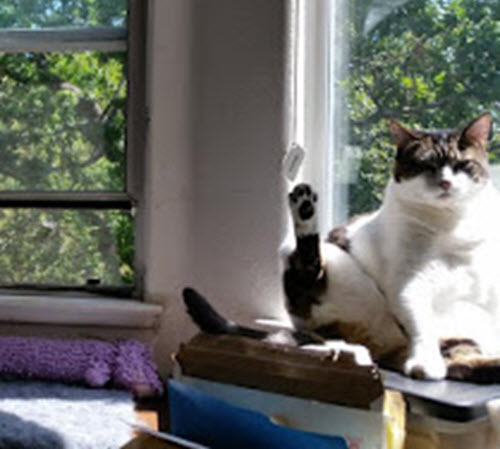 One Way To Five Five -That’s our gentle giant, Zack!  The vets also get a kick out of the way he sits straight up while cleaning himself-and high-fiving.
Zack works for his food- and slowly loses LBs!
Great Diet Trick and Tip –
Make Your Fat Cat or Dog work for his/her food

Who says cats don’t do tricks? Here Zack does real high fives for his food!

Received a very nice card from  my ‘regular’ vet – not the one involved in Ornji’s oncology in later days – and it made me feel so good I wrote this back; writing is often therapy for me and  this made me feel even better, expressing my love for Ornji and how we bonded and got through a wonderful four ‘bonus’ months with NO OBVIOUS PAIN. The pain would come for me later, and hasn’t gone away yet two weeks later though I’m working on it as Ornji probably would have wanted…

Your card I received in mail today meant a lot to me.

I just came upon words to that effect as I worked thru my grief following the loss of Ornji. I guess that describes me. The more one loves the more potential for hurt…  as told in sources like Tao and Kahlil Gibran.  I’m no scholar but it makes Sense to me.


This has been a real hard one, even with the ‘bonus’ four + months

Ornji and I had together. I’m so glad we did have the extra days with   the chemotherapy and all yet in some ways it made it harder because we really bonded more than ever, trying

to squeeze each extra drop of life out of each day and minute caring for each other (yes, Ornji took care of me, too, really showing his appreciation, never complaining, still enjoying a surprisingly good quality of life to the end. He had a real will to live and

responded positively   time and again every time we thought it might

be over. ) I tried to help keep his life quality great with lots of scratchers,  cat beds and window places  for him , favorite  quality foods and treats – and Ornji tried hard to enjoy every day, even sick (you wouldn’t have known it most of the time) still enjoyed

going outside in his ‘extension ‘ to the very last morning. Only that last night did he really show any sign of ‘maybe this is it’ by coming out -not hiding as some cats will do-

then lying listlessly while telling us with his eyes that it was probably  his ‘time’ for us to let him go. (Ornji had ‘come back’ so many times but even only a day after a very positive doctor visit that showed weight gain and higher blood results, that darn liver just wasn’t cooperating.  After finding an unexpected helpful

Dr LaFarge ( ASPCA) on  hotline who encouraged us not to wait too long we brought Ornji right in and Encina night doc  Dr. Lew (?) confirmed that Ornji probably wasn’t going to bounce back this time, and who was helpful with Ornji’s final moments.

Though it’s  hard now, my four + years with Ornji were wonderful (it’s own story ) and just one more pet experience that makes me appreciate pets and especially Ornji more than ever – from the time Ornji first walked up to me in the yard, then directed me to the basement

door where he wanted to stay at night – and did for the first three years , until he got sick and became  indoor cat (which was another great  experience to have a second cat again for me and Zack  (only a short time after Weepy and April passed)…so even the timing was great.

I enjoyed getting up early every day – 5 am, then 7am to  see Ornji happily eating well – even if we had to sometimes go through 2-3-4 different cans, at usual eating times  and  throughout the day, then going to enjoy the outside for awhile before coming in for a brushing   at my feet or occasionally jump on on the desk next to me ,a s I worked… There was no real  gradual deterioration or noticeable ain like I’ve seen in previous pet s.

We were very lucky to have had Ornji with us even if only four years and I hope he felt the same way.

Sorry to go on so long, Dr H Esso and staff… but not everyone is as receptive and sympathetic as you

and this helps me in the grieving process.

Please, no need to respond to this – it is my therapy, just nice to have someone to  whom to send it  . And, I wish I could thank all those at Encina involved in Ornji’s care such as the nice young women administering the chemo.

Well, one thing for sure, Zack now is getting the attention from me he didn’t get while we were intent on Ornji. I know we owe him a teeth cleaning with you and will make every effort to get there in the next month

Thanks again for your very thoughtful card,