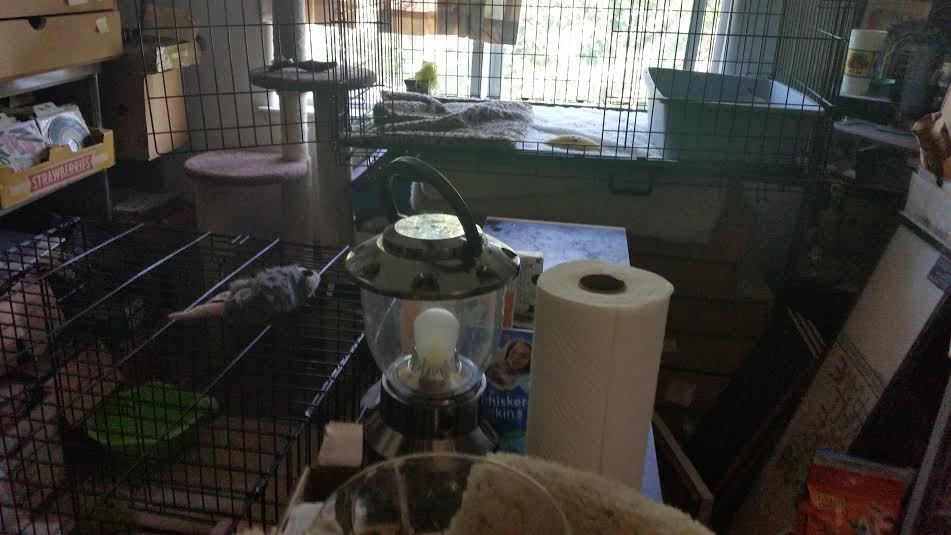 In case you haven’t been following, my beloved cat Ornji, HIV positive, had a sudden downturn in his immune system just before transitioning   to become an indoor cat – just for the reasons he was getting sick, and it was nearly TOO LATE. In reverse order, you can appreciate how things all came together in these four chapters. After losing my first three male cats to HIV, FIP and FELV – all in less than six months of getting them, Ornji, along with Zack have turned the tables, showing that Good can happen out of Bad. It’s a story I wouldn’t have believed one week ago-nor would even the vets, themselves

LEARNING OF THE ULTRA SOUND RESULTS, EVEN VETS JUST SHOOK THEIR HEAD – AND HAD ME DOING IT , TOO

Can’t believe how everything has come together and how well Ornji seems to be doing. Though we haven’t yet received the final biopsy it doesn’t matter. Ornji is BACK and near living a quality life, all be it indoors this time (even if he objects- but don’t think he will anymore; like Zack, hopefully he’ll  appreciate the new indoor life after what he’s been through.)encina 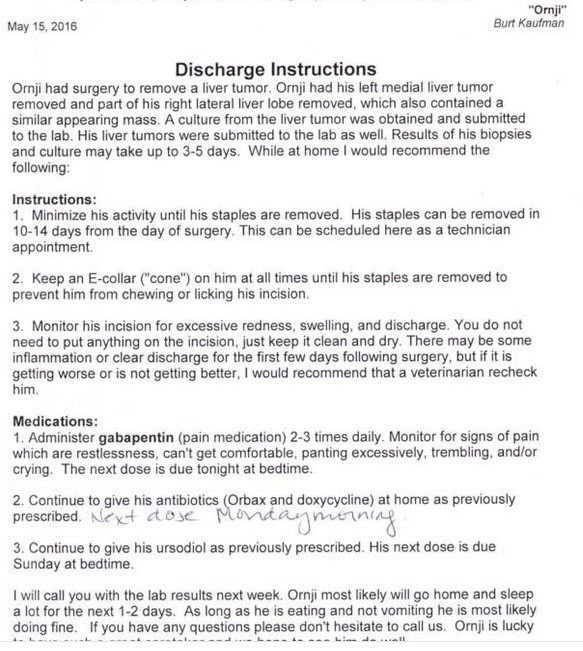 We followed Veterinarians’ discharge instructions to the T . The only trouble was getting one pill down Ornji with the cone on his head. We learned that this pill could be put in fish solution like others but it was too late to get this so we crushed the pill ourselves in the same fish solution we happened to purchase for this very reason-just in case. Result: Flying colors for Ornji!

Ornji’s entire underbody is shaved with staples scarcely holding things together. Ornji’s confinement   to large dog crate(s) the past three days has probably  helped keep the wound from opening, as we were warned could happen. But it didn’t. Nor has Ornji had to take the appetite enhancer, Mirzapene(sp). He has been eating better than I ever saw him eat, even as an indoor cat, going through as many as 3-4 cans of his favorite foods a day (I rotate between Max Cat chunks,Fancy Feast and Friskies gravy-enhanced products and discovered a new favorite,  Fancy Feast GRAVY LOVERS in the process.

Since Ornji is not drinking much, or any, water – perhaps because it’s hard for him to lap up from the water dish with the cone around his head- so these gravy products at least give him some liquid. And further good news…NO MORE SUB Q FLUIDS! ( I just had assumed he would be on these the rest of his life like so many other pets who had to make do following similar significant surgeries. ) But, perhaps I better not get too carried away. After all, it’s only been four days and Ornji has another 6-8 days before his staples and collar are removed; his body remains somewhat fragile at this point, at least at the point of the incisions.

Everything has worked out in this series of operational events swimmingly!  The two cages I recently purchased for  our ill-fated RV trip have come in most handy-first, to keep Ornji in-house, as suggested by vets,  after dental surgery two weeks ago,  for the first time ever, and , second, as an “extension” from the patio door to the outside deck, allowing Ornji to continue to enjoy the outside during the full transition to in-house, we (I) decided to make at the same time, as I felt it time Ornji to be indoors after three years and signs of slowing down, and 3) recovery from unexpected liver surgery (which had accounted for the previously-mentioned ‘slowing down.’ Without those cages it would have been near impossible to give Ornji the same attention -and, I might not have even thought of it later, with all the near-panic that had set in.

Vet bills are often criticized  for being higher than similar bills for similar human conditions. Never mentioned is that pets can be much harder to operate on since they can’t talk and answer key questions dealing with surgery, or even dental care.

I was given the usual high and low estimates and when I got the final bill I was surprised that the final bill was even less than the original low estimate. I had been ready to pay almost any price that would keep Ornji alive, but this was icing on the cake, and I was even able to pay off the bill on Sunday night when I picked up Ornji from a long post-op weekend.

Today, Wednesday May 18 I got a call from the nice tech person ‘S’ who really kept me most connected during the entire surgical process-from the sudden, unexpected late Friday call for Saturday morning surgery to now. S said that she had called to apologize, that she had some ‘bad news.’  What now, I thought. Things have been going so good. I didn’t even think about biopsy. Well, it was ONLY about money, that they had forgot to bill me for the surgeons portion of the bill, or around $2000. I had thought about this earlier as I perused and paid the then balance Sunday night  ; we certainly want the doctor to get paid, and what’s another couple thousand for keeping my Ornji alive! It was so nice of S to dismiss some other small, extraneous costs to help out.

I was actually happy to  hear that the ‘bad news’ was ONLY owing more money, when it could have dealt with life and death issues.

To think that this entire surgery and post-op care is barely more than I paid for a tooth implant is a bargain, in my opinion. How can you even put a price tag on saving a life??? So, I asked S to give me a few days to get the additional money owed, and she gladly agreed – not something I ‘m used to in today’s world where money is now often collected IN ADVANCE at doctor visits! 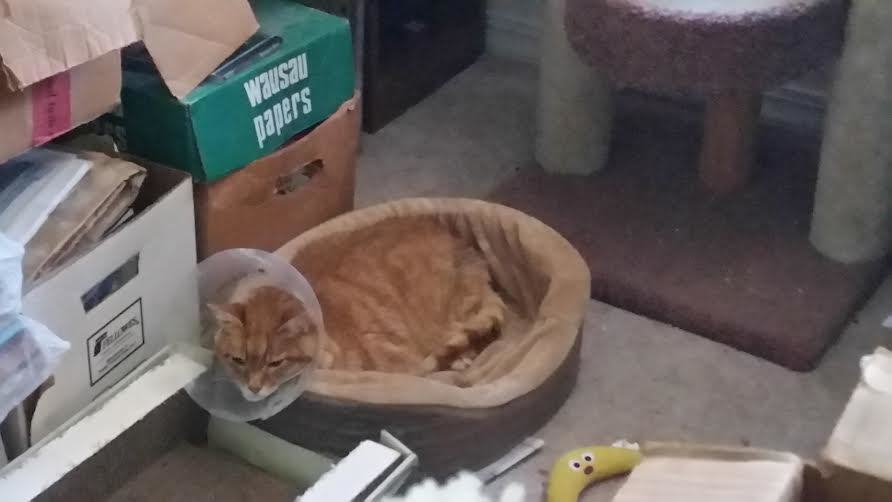 Like with everything else that seems to have gone right this week ,following a week where everything went bad, the call from ‘S’ answered a few more questions. I wasn’t sure if Ornji was getting enough water but S assured me that if he’s eating wet food well, he’s getting enough water for now. But, even better, the call came just as Ornji seemed about ready to ‘escape’ the cages. S suggested that some patients will keep their post-op pets in a confined room. So, just after talking with her Ornji, without verbally complaining, showed every indication – by standing at the cage door- that he would appreciate having the full room back. Enough confinement, he indicated, and I agreed. So, Ornji is now back in the ‘big room.’

And, hopefully he will accept this for the next 6-8 days until he gets the stitches out.  And, as of May 19, Thursday morn, so far so good… even let Ornji take a few steps into the REAL BIG House hallway but could see he is still a bit wobbly, so put him up in the window crate in his room for a little daylight view of the birds, then will give him more variety later on the floor of his room., and continue similar procedure until the stitches and cone are removed in about six more days.

Credit Ornji for putting up with all this nonsense (good nonsense) but other cats could be confused and not understand,but Ornji has taken everything in stride, from the cone to the oral medications. He has only vomited a single time and continues to use the litter boxes – no messes to date, even with his weakened condtion,  and now he continues to eat as well as ever. I won’t get over confident and say Ornji is out of the woods but if everything continues the way it has been – and I see no reason it won’t , Ornji should be well on his way back to the old Ornji we know and love – something many had doubts about a week ago! But not Ornji! (PS Dr. W provided initial biopsy report which she considered relative ‘good news’ in that there was no cancer where the one tumor was removed and the other tumor is still unresolved. Final reports to come. Worst scenario – and probably something we’ll do anyway – is to get Ornji regular (twice a year) ultra sounds so that if the cancer does grow it can hopefully be surgically removed, the only realistic way to treat the tumor, according to doctor. Remember, the liver regenerates by itself