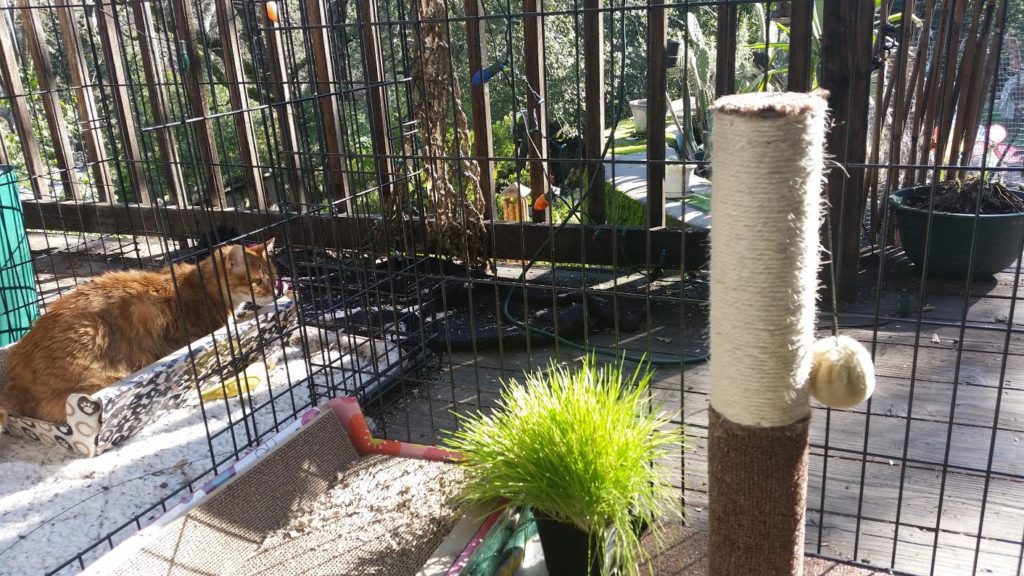 Ornji enjoying his days in the morning sun in his new ‘double-wide ‘ outdoor-indoor extension replete with cat crass and all. 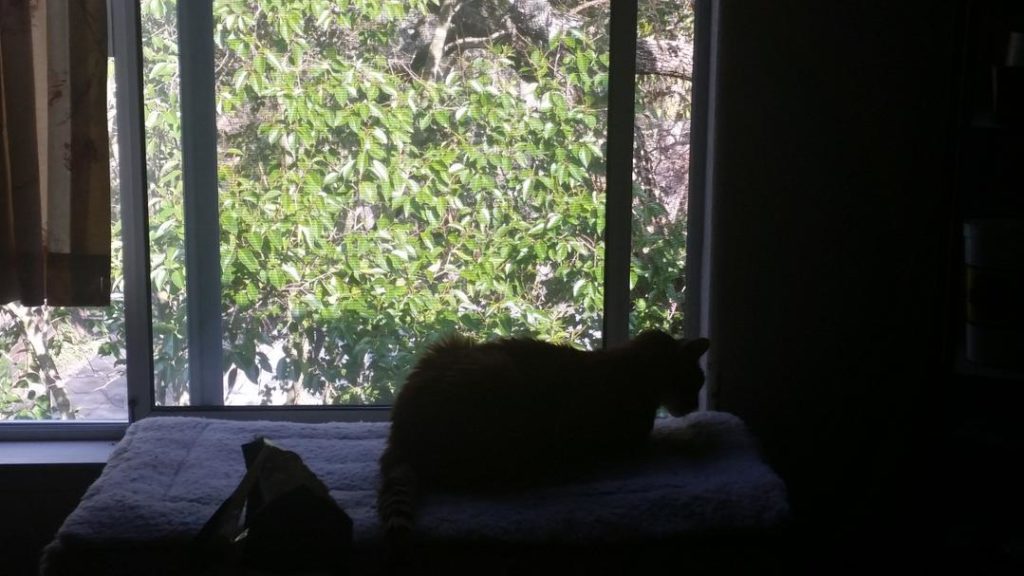 Ornji back in the High Life Again after fooling us all, not eating again – here in his new catbird position 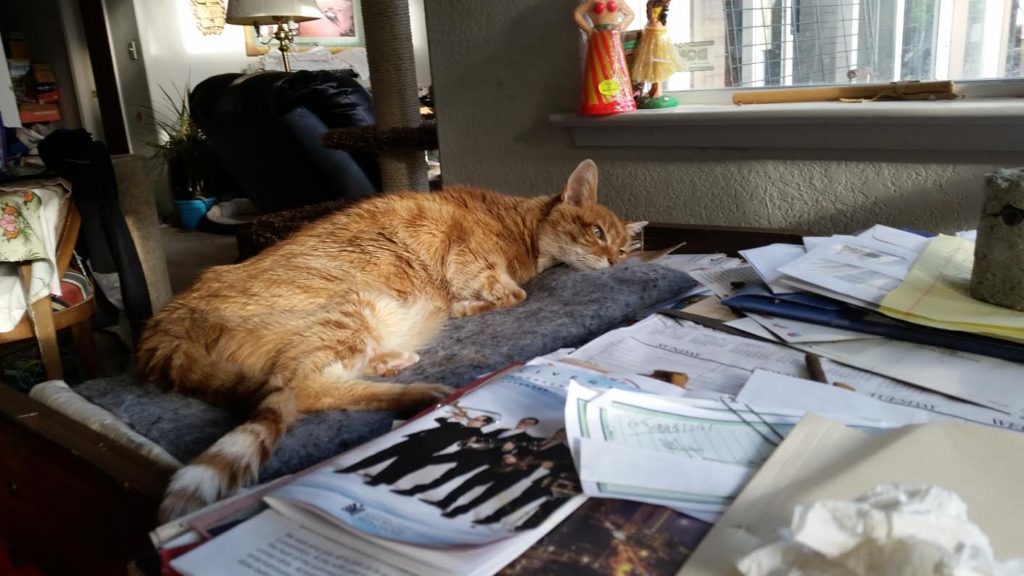 It’s like another dark curtain has lifted…  Ornji is still here(!) as of Feb. 23 and following our medical visit this day  just got good word from  Dr. A , who seemed very happy to report that Ornji’s red blood cell count and other numbers were  ‘up’ (!) with one minor exception, which we will remedy with a supplement.  Doctor seemed pretty surprised , just phoning us this good news, especially after earlier casting more doubts  when looking at liver x-rays, which he believed to show a slightly enlarged liver, despite the followup good news as doctor just shook his head in amazement.

After three weeks with some real roller coaster ups and downs, this had been one of a number of  24 hour periods with Ornji not eating , and it just happened to be time to see the vet for a three week checkup.  After six weeks without chemo I was worried that this might be Ornji’s time. Not that I couldn’t handle it. After all, Ornji had been given four bonus months, much of  his own doing -and it is possible the chemotherapy didn’t really help in the long run-  and I had enjoyed every minute of having Ornji around still enjoying quality life.  Of course, I’d worried that many times before and Ornji always seemed to bounce back – but that was nearer the time  of the possible benefits of chemo. Ornji was on his own now with only a daily anti-inflamation steroid shot he has been getting since we stopped the chemo. He’s only had to take Merzapine appetite stimulant on rare occasions. It was probably the UNKNOWING day to day if this could be the last one.

Chemo had been ruled out weeks ago as Ornji had already benefited about as much as possible for his type of cancer (liver). He had begun to get sick from the chemo and was not bouncing back as well as  before.

It has now  been almost six weeks since his last chemo , yet Ornji is still hangin’ in.  I went into the vet this time with real trepidation that Ornji’s lab numbers would be way down, not to mention his weight. Frankly, I had been down in the dumps more than ever this past week seeing Ornji appear to change physically and even mentally (slowing down). Perhaps the cumulative affects of the relative few hard times with Ornji – but more from my past- had been taking its toll with me. But then, overall Ornji had been eating well and going outside on nice days into his little outdoor extension cages, which he seemed to enjoy (in contrast to Zack, who preferred the warmer indoors). I had made up my mind to accept whatever comes. Expect the worst , hope for the best. In this case, the ‘best’ was about to come

SURPRISE GOOD NEWS – Ornji Not Only Alive and Kicking but Numbers Are Up!

If you’ve followed these pages for the past chapter(s) you may have wondered or possibly thought that Ornji had met his match – as was expected by now – four months after Ornji was given an approximate 2 month extension.

But Ornji is still here(!) as of Feb. 23 and following our medical visit this day  just got good word from  Dr. A , who seemed very happy to report that Ornji’s red blood cell count and other numbers were  ‘up’ (!) with the exception of potassium, which we will remedy with a supplement.  Doctor seemed pretty surprised telling me this, especially after casting more doubts earlier when looking at liver xrays, which he believed to show a slightly enlarged liver, despite the followup good news.

Doctor had asked how often we had to give the Merzapine appetite stiumulant and when I told him ‘rarely’ he said that was a good sign and his follow-up lab results bore that out.  I will keep that Merzapine question as a ‘barometer’ for future reference, hoping not to have to give it to Oarnji often, which could likely mean his numbers are still ‘ok.’ So, we have somewhat of a mixed message ,as I see it , from Doctor;  on one hand Ornji’s numbers are up, which is good, but his liver looks more enlarged, which is bad. Well, I’ll take any good news at this point.

In answer to Doctor’s other question of me regarding Ornji’s ‘quality of life,‘ I would have to say ‘decent to good,’ too. If Ornji weren’t feeling good I doubt he would go outside for hours at a time in the still-winter chill or eat as he does and not hide like we’ve seen in .

I’ve also noticed that when I’m away for long periods of time (as in hours) like this past weekend when I had to attend relative parties about six hours each day, Ornji misses his usual ‘eating  sessions’ when he comes to get me to open several cans ’till he finds one he  likes. Without me here he has to eat whatever (old) food is still sitting out for him.  Probably somewhat upset and perhaps under-nourished, I would find Ornji in a solid sleep mode with no interest in getting up to ea t when I came home. This could last on end. At least , today, Ornji has eating well , both in the morning and after coming home from the doctor, so I will venture out for a  few hours now, for the first time in four days-since the weekend. (Well, it’s nice to know that Ornji seems to appreciate me, even if it’s for the food; however, he also comes over to sit by me while I’m at my desk, which I appreciate).

Supplements May Be Helping – but Credit Ornji’s Will To Live

Will never probably know for sure if the Poly DVM nutritional supplement we have been giving Ornji twice a day with his updosed Ursidol (for liver) medicine is helping but it certainly may at least account , in part, for Ornji’s ‘eighth’ or ‘ninth’ life, if you will.  (We had read aboutg some success from teh Poly DVM on websites and tried that out since Doctor thought it couldn’t hurt-and just ordered some more of it.

Now, with the new potassium supplement, we’ll see if that also may help Ornji. Going to pick that up now! But, most of all, I’ll credit Ornji for a fighting spirit (as he demonstrates with Zack) and a real will to life/zest for life for keeping keeping on -which we all here greatly appreciate for as long as  is realistic. I’m already gratified that Ornji has lived the extra three or so months as ‘promised.’ That was a bonus and all days now are an extra special bonus.

So, for today and hopefully a number of  days to come, at least,  I feel  as if a cloud or curtain has lifted- for now  with the news that Ornji appears to be doing better than expected and I shouldn’t have to worry day to day about Ornji not eating – at least not for now. Being a sensitive person who has lived and lost prematurely too many times (one is too many), I am grateful for the KNOWING that Ornji appears to be good to go for now and we will be back to enjoying life rather than spending so much time worrying

Wonder of animals is that may not even know they’re sick and, with perhaps  a little help, their instincts for eating and other functions remain intact. Unless things get very bad, our pets are capable of bouncing back. With some TLC including the right foods and living conditions, our pets can surprise even the greatest skeptics, including sometimes myself.  As our vet dentist told me recently after learning of a previous ‘bounce back,’

ORNJI WONDERFUL, SMART CAT Who ‘Came Back from the Streets’

​2-24- 17  9 am ​
​ Ornji just threw up his food, which could be a very bad sign.  I was about to write that it has been a joy to be with and, hopefully, he’ll bounce back from this possible problem. He’s one of the smartest cats and very good at communicating to me his needs and desires. He knows exactly what he wants and has made the most of coming from the streets  to our home
Yesterday, just going to the vet and getting some good news had been a big psychological (at least) lift. I will try to hang on to that for now…