Ornji doing that tree climbing thing during his formative years, outdoors. We will miss these times but look forward to the many benefits of indoor living now with Ornji an indoor cat– if all goes well.

It’s now over three years that I’ve had Ornji, who came along just before I lost Weepy and April after nearly 20 years with both of them. Ornji wandered up to me one day,  9/11 /12 , as I recall, looking for a home and friend. He’s been a fantastic cat and best buddy ever since-staying outdoors except at nights when he has (mostly) slept in the basement.
But now it becomes an emotional time. When Ornji first game to me he took me directly to the
basement door , indicating that he wanted a place to stay indoors at night. (Smart cat.) But, recently, he has not been using the beds I set up for him in the basement and taken to sleeping or even hiding in different places.
He also has not seemed to enjoy the outdoors as much, coming into the garage early to sleep.  Could be as he’s gotten older -though still only about five or 6 years old-he’s tired of the cold nights and/or wildlife including wild turkeys stealing his food, etc.  So,Ornji has giving ‘signals’ of
maybe wanting to become an indoor cat. So, I have finally cleaned up my extra room that I had long intended for a second indoor cat ‘home base.’. (My current indoor cat, Zack, has been staying in my ‘office’ as his home when I go out. 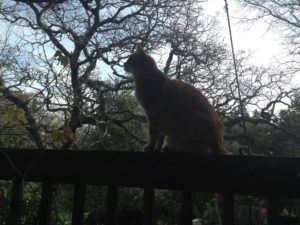 Silhouette of Ornji on back deck rail during outdoor days
After  Ornji’s teeth cleaning last week, the vet suggested keeping Ornji indoors
that night as he was still groggy from anesthetic, so I  thought this would be a perfect time to introduce Ornji to a REAL HOME and his new room.  As this decision came totally unexpected, I had to move fast to move almost 20 years of storage (and dust) to clear some space for Ornji . I  planned to put one of the big cages we used on our RV trip in the window (including litter box and carrier – SEE PICTURE BELOW) – at least for the first day(s) until it was time to release Ornji into the larger room.
It was a cold, dark day and I think Ornji took to the room well- at least for the one night. I continued to let him go outside in the mornings for the next few days, where he has been eating his meals in front of the garage – but keeping  my eyes on him at all times. (For some reason, I had a fear he might run off in response to me keeping him  indoors; my first cat , JUICY, also orange color, HATED being indoors…so these memories  came back to haunt). But Ornji is more mellow than was Juicy and seems to be accepting his new status. As of today, I am planning to keep Ornji indoors full time, letting him come into the main house for short periods to begin with. When Ornji is out in the house I keep Zack in his room and this is what I will do for a while before introducing the two cats – who have already seen each other through the window many times when Ornji was an outdoor cat. (Actually Ornji and Zack were near each other in that ill-fated RV (trip) on my birthday,April 7).  (One of those same large cages has come in handy, set up in the living room where I will put Ornji , separated on first meetings with Zack.)  Remember, Ornji is FIV positive so that is another good reason for making him an indoor cat as well as keeping him separated from Zack for awhile ( and whenever I’m  away)…  So, today is the first full time day for Ornji indoors full time. 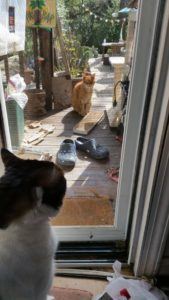 Ornji and Zack looking at each other through screen when Ornji was an outdoor cat
Wish us well.   Though I know the move from outdoor to indoor cat is supposed to be a positive thing
in the long run, I already miss spending my early mornings outdoors having coffee an readingthe paper with Ornji close by, or actually exploring near the back creek with him (acting as hiscat ‘brother.’). Sad to think these outdoor activities will never happen again (unless Ornji shows an extreme desire to go outside, though I know I must be strong on this;  he should soon appreciate all the benefits of indoor life, hopefully .) Zack was
a long-time outdoor cat who gladly accepted the indoors when the time came, after he nearly
lost his life to fatty liver disease while living outside.) Now, Zack and Ornji will each have a new friend and the house will again be a happy ‘three-some’ as it was with April and Weepy (though their unique personalities will never be replaced).

Ornji in ‘starter cage’ in his new room. I open the big cage (with food and litter box) on occasion to let him explore the room with the plan to, eventually, take the cage away.
ARTICLES –  Here’s an especially good article about ‘Turning Your Outdoor Cat into an IndoorCat’
FEATURE: WATCH ORNJI TAKE THE PATH LESS TRAVELED or ORNJI WALKS ON ROCKS: