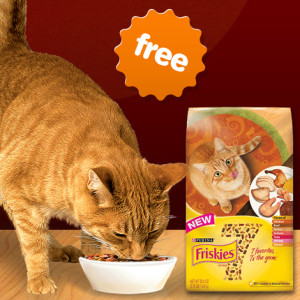 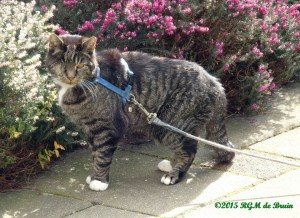 Domino, earlier this year, after losing his right eye. You wouldn’t know he’s bothered by it. As common with animals’ indomitable spirit, he probably figures it’s no big deal – he’s still got another eye. BTW, why can’t I get my indoor cat to go out on a leash?

There’s nothing worse, in my book, than having a  sick pet,especially a VERY sick one. I know. I’ve been there many times, like about 10. And, there’s nothing better than seeing an animal ‘come back’ after being at, pardon the expression, ‘death’s door.’   This is a little chronicle about Domino, named after a song by Roy Orbison, who just happens to be guardian Rene (as well as Domino’s) favorite singer. Domino and the Debruin family live in the beautiful Netherlands, where Josiane and Rene have done a very good job keeping a photo journal of Domino’s ‘goings on.’  This is a story about love and attention and caring and doing all the right things and -VOILA!   The following pictures and captions will tell the story of  April , 2015 in the life of Domino and the Debruin family.  As noted, Josiane and Rene chronicled the days and lives of Domino and family with  professional-grade photos, we share here, with their permission. (All photos copyrighted)

It wasn’t more than a year ago, that Domino- who lives in the Netherlands
with ‘Dad’ Rene and ‘Mom’ Josiane –  first was diagnosed with
a serious medical issue that affected one of his eyes. There was worry
about  Domino not only losing his eye but his existence. After weeks and months, with great
care and attention – and, yes, significant medical bills – Domino
survived that one. At first, a new medication temporarily saved the
one eye, but, only for so long. Yet, as with many animals, losing an
eye is no major tragedy, and Domino has been a ‘trooper’ the past year
since hardly mentioning a thing about his eye. After all, he’s still
got another.   But then,  a few weeks ago, tragedy struck again. 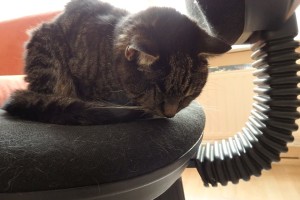 4-2-15 This is how to survive another visit to the vet. 2 April, DOMINO still groggy. ‘Everything’s ok with me only my teeth are cleaner now but my throat hurts! ‘ (Rene for Domino) 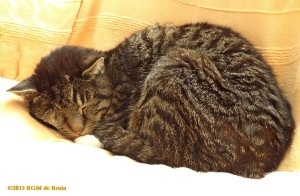 4-3-15 Domino sleeping the effect of anaesthesia of today..Sheer impossible to disturb him çause I’ve been (unwanted) noisy around him, Just lifting an eye-lid now and then and just staying in position. Only moves for food, drink and a visit to the garden. Tomorrow he wil be more energetic for sure!! 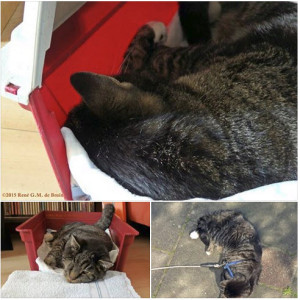 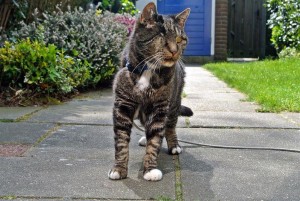 4-20-15 Josiane is busy with a ‘new’ second hand systemcamera and shot this picture today from a low angle. You wouldn’t tell he’s so sick would you? Anyway, the worst is actually that he doesn’t pooh and hardly eats whatever you serve, even his favorite. Time will tell.  (Rene) 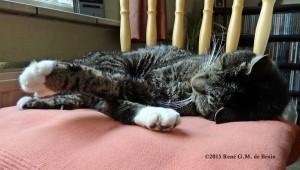 4-25-15  SIX DAYS LATER… About Domino, he’s bloody skinny but he hardly eats. Josiane tried a new trick this afternoon, something new from a label he normally prefers. It has extra sauce and he does love sauce. Well, the bowl is shining empty!!. So when it’s nice enough he’ll eat…..Now we still have to wait if the rear end of his body will also start to work, still nothing (Rene)…….Not looking good, but, never give up….at least the DeBruins and Domino don’t… 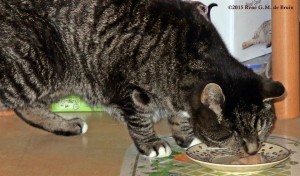 4-26-15 – A picture tells so much more than words will ever do. These pictures taken yesterday evening (27-04) with Domino who refound some of his apetite, fresh chicken. Seems he’s slowly returning to a normal state! But keep fingers crossed!!!

Yes, fingers are still crossed for Domino, but, already, it’s a blessing what Domino and the Debruins have already accomplished…

We believe that God , or nature-or the person ‘upstairs’- often gives
us ‘bonus’ days. Especially for those of us who really care and take
measures to do what’s right, whether for themselves or their loved ones,                             – in the case of Josiane and Rene, their Favorite Furry Friend, DOMINO..

I’ve seen my sister’s and my dogs, Pucky and Roscoe                                                                           live to 18 despite various illnesses that were expected to shorten
their lives by many years. (Pucky lived a whole extra quality year
with ‘sub q fluids’ administered to him by yours truly, once a day
(one of the best years of our lives). I’ve seen my Dad live to nearly
98-five years after severe strokes resulted in the hospital medical
staff requesting me to put him in hospice; he lived those five ‘bonus’
years never having to deal with the mental anguish of being in hospice,
not that it’s such a bad thing). Cat April lived extra years, to the
ripe age of 20- following cancer surgery that wasn’t expected to do
much and Weepy lived with a heart murmur 17 years. And, Zack, two hours from death, according to the vet, came back, literally , from death’s doorstep -he’d been existing on
a foreclosed house porch in the cold and rain) where he had come down with
an extrreme case of fatty liver disease.

Now, add Domino to that list of success stories. Who knows how many bonus
days are ahead, but it doesn’t matter.  Not to say that  there have been a lot of other pets and their guardians who have tried hard but haven’t always been so fortunate. But, it seems, that often, we’re given those extra days if we CARE and TRY.  I’m sure Domino will enjoy each extra  day, or every sandwich, as a great songwriter  dying of cancer once said. 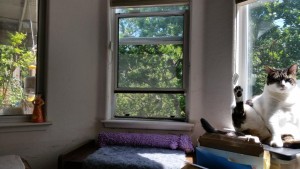 ‘Already had some FB contact with you tonight, right now you are the last friend I need to reply to before shutting down the pc…..Domino must have an army of guardian angels. His behavior is quite back to normal and yes, it’s giving him a big effort, but the rear end is working. It’ll take some more time but I’ll say the greatest fears for us and the vet are behind us now. Back to recovery. See him just walking by on the way to his food bowl.’