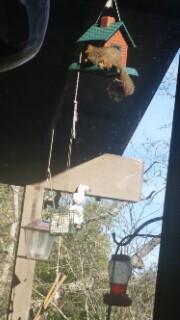 FLYING SQUIRRELS – Ornji and Zack can’t believe Squirrel flew into bird feeder –how else did he get up there? -among the interesting sights and sounds in the great wild just outside 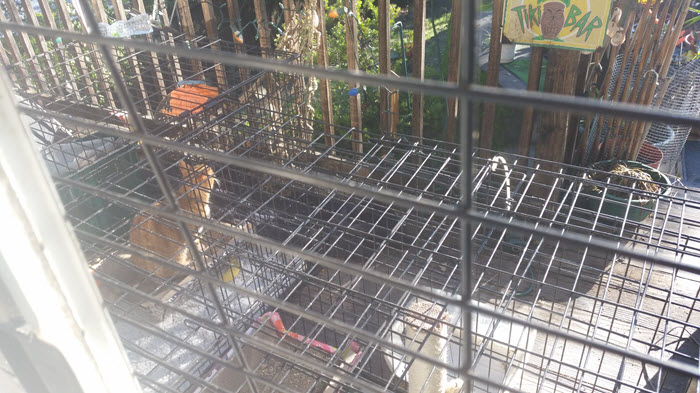 Just this morning 1-6-17, Ornji enjoying bright morning sun in ‘double-wide’ outdoor extension, checking out ‘flying’ squirrel (at left) . Life continues to be good for Ornji as he enters a new year. When Ornji’s chemo becan in November we were only cautiously optimistic Ornji would see this day

Truly Happy New Year to and from Ornji Cat

It’s definitely a Happy New Year for Ornji and his people as ORNJI HAS MADE IT TO THE NEW YEAR , 2017.  Not to obsess over TIME but it IS the thing we all  seek most as we get older and sick- especially in Ornji’s case as he has non-operable liver cancer. 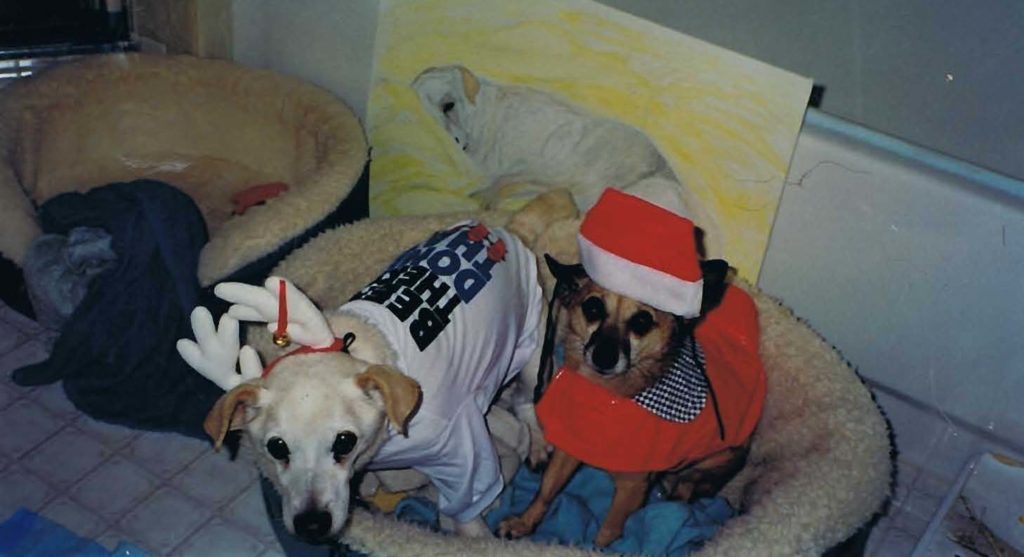 ORNJI’S STEP-COUSINS (HE NEVER KNEW), ROSCOE (L) AND PUCKY IN THEIR LAST CHRISTMAS TOGETHER , December 2001. ORNJI WAS SPARED WEARING ONE OF THESE ORIGINAL COSTUMES 12/25/16 HIS GUARDIAN NEARLY HAD HIM WEAR FOR OLD TIMES SAKE I had intended to dress Ornji in the same Christmas clothes we did Roscoe and Pucky for their last Christmas over a decade ago (Roscoe , left with Pucky – a fox-Chihuahua(!) ) IF Ornji made it to December 25. That would have served as a landmark and memorable time for Ornji but I decided not to stress him out. But, Ornji has made it and still thriving here in early January nearly two months after he began chemotherapy (How time flies even though I try to do everything to ‘stop the clock’ like being here as much as possible and enjoying Ornji’s ‘bonus days.’ All these other HAPPY DAYS pictures will serve instead of the proposed Christmas picture…e.g. Ornji in the ‘double wide’ extension, Ornji on his cat tree , Ornji in the window on the desk checking out the sights and smells of the back yard wildlife, etc. 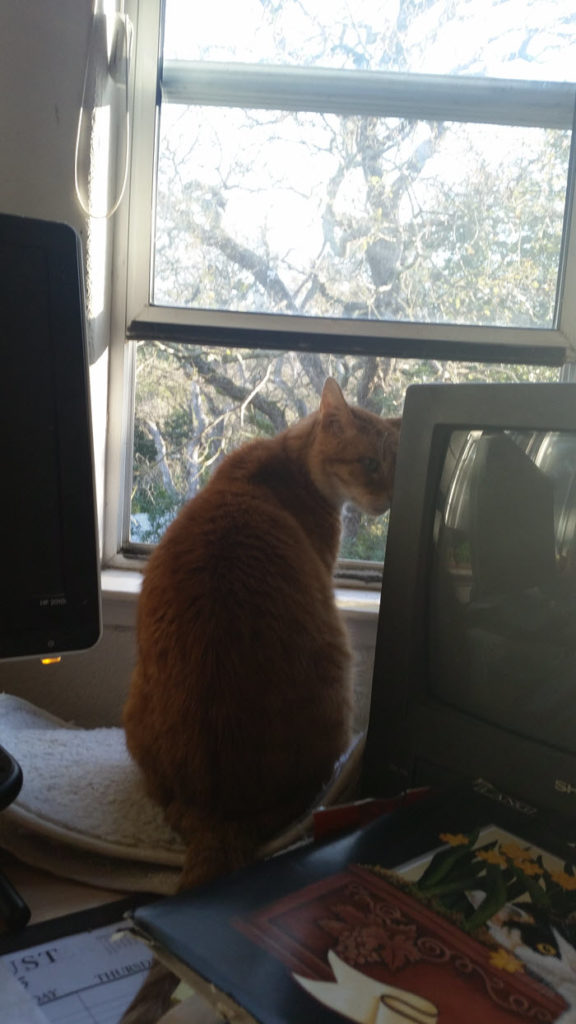 Ornji in second morning phase, after an hour outside in extension, cooling off or warming up, shall we say, back indoors looking out from his favorite desk window

Always looking for new and exciting things to make the days EXTRA happy-as if they aren’t already what with  Ornji hangin in there as he has- Ornji did something (good)  tonight 1-5-16 that he’d never done before.  In the four years I’ve known Ornji he never ate an entire can of food. In fact maybe only once did he eat half a can of food and that was when I first came to me hungry  and cold.  Today we  tried out a new healthy food, Tiki Cat Tuna with Pumpkin sauce  and I was shocked when I came back to see he ate the whole thing – and I made sure Zack didn’t have anything to do with it as I was monitoring him in the other room.  We tried a flavor of Tiki Cat some years before and Ornji liked it but not THAT much, and being it seemed pretty expensive I didn’t  continue it. Being Tiki kind of guys anyway,  now  Ornji’s going to be seeing a good diet of Tiki now.  Good to  wean Ornji off the Friskies . He has enough other good brands he likes anyway…  and , really, when you come down to it the small cans are only about 20c more than the some of the lower quality yet tasty stuff hes been getting since there weren’t a lot of other foods  he liked. So, let that be a suggestion to you cat lovers who want the best for your cats (and dogs) – TIKI TUNA with pumpkin. Now , maybe Ornji’s  one blood count that came back a bit low in the results of today’s CBC will improve with this improved diet!

1-5-17 Yes, just got a call back from Dr A only hours after the test with good results again, following last week’s (fifth) chemo, except for one number that was a little low but not low enough to have to put Ornji on antibiotics..  It was a nice sunny morning after a lot of rain so Ornji, though slow getting up  this morning, ended up spending over an hour outside in both sections of  his new ‘double-wide,’  Then it was off to the vet – a bit late. Make it a lot late as we were moving slow and had the appointment down for 10 am rather than 9am. Since it was just a drop off appointment to take blood the vet office was especially nice about it…

THINGS COULDN’ T BE BETTER,  EXCEPT FOR…   AS PERFECT A LIFE FOR A CAT WITH CANCER and LIMITED TIME

There’s an organization called ‘Make A Wish’ that grants  ‘Last Minute’ Wishes to young people with terminal illnesses, such as meeting their favorite celebrities or taking them on ‘dream vacations.’  While Ornji may not have it that good,  we’ve worked out what would appear to be the ‘perfect’ living situation for a cat, which Ornji seems to have settled into and may be one reason he’s still flourishing despite his diagnosis.

Ornji awakes and runs down the hall to his favorite eating spot (his room) , usually around 5-7 am , and to his first meal of the day, usually a favorite such as the newly ‘discovered’ Tiki  Tuna with pumpkin  along with Max Cat kibbles. Then it’s out to the main living room and the bright sunlight of the dawning day.  If not too cold out –it’s been freezing at night-  Ornji will usually go out into his new ‘double wide’ extension to really savor the outside light and smells along with the birds and squirrels at their nearby feeders.  I’ll sit just inside the patio window , so as to  share in Ornji’s seeming delight in his favorite outdoor   ‘extension,’ replete with scratchers and loungers.  Ornji will spend anywhere from minutes (if cold) to hours outside before returning … usually to my desk where it’s warmer and he can still enjoy the outdoors in the open window ‘cat bird’ perch ro a special warming pad. 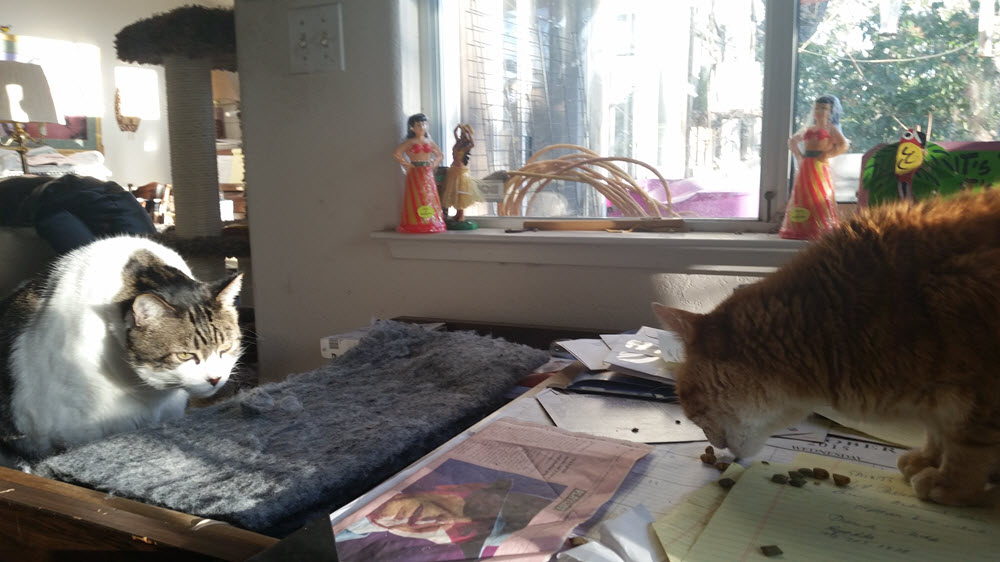 No, they’re not preparing to fight, ‘big guy’ Zack just can’t pass up a meal… or any food as he stares intently at Ornji snacking on desk.

Everyday is a little different. Today, Ornji  hung out several hours  just inside the big patio window  and ‘double wide’ on the carpet just  below Zack on his pedestal.  Then , around 11 am it was snack time and another flavor of food , after which he would clean himself on his cat tree in same room  as he enjoyed the outside from another window.  Then it was back to his favorite ‘heavy sleeping’ area  on his bed in the back bathroom… and that’s just the morning.   As noted elsewhere, Ornji ‘s  had another successful day, yesterday, following a good  ‘CBC’ blood test, coming right home to eat an entire can of Tiki Tuna and then spending much of the evening in the front of the house with us (which is rare); Ornji usually prefers the back of the house evenings… and so it goes. Ornji now has various places (outdoor extension/loungers, living room lounger, work desk/window, his room eating area with cat tree and lounging pad, back closet and/or back bathroom bed for heaving sleeping and also the kitchen area for another eating spot he prefers at times.

Ornji knows exactly what he wants. When I open up a can of food he doesn’t want he knows instantly  just by smell while he awaits for me to bring another  cat of food he likes better. Sometimes Ornji wants the food placed in a slightly different spot than the previous feeding, which, of course, I accommodate.  When I’m working at the desks and Ornji wants something, usually food, he will come and get me by coming around the side of my desk, not uttering a sound (unlike Zack)  and wait while I ,first, pet him and then after 10 seconds or so he’ll lead me to his room for  meal  time. It’s really all so sweet, as I see it.  Perhaps others wouldn’t be bothered – or even be around most of the time as I try to me – but I enjoy it ; call it the ‘caretaker’ in me.  As I said, everyday’s a new adventure. Today I actually went outside before Ornji came out and  we would later end up hanging out together , he in his extension and me on the patio deck right next to him with my paper and coffee.

Fortunately , the mornings here are sunny when the cats come out.  Afternoons get cold and dark and a good time for the cats to sleep and for me to go out and do my errands.  I may not get done as much as I should but I’m enjoying life with Ornji and Zack. I know this could end any day.  One day Ornji will probably not want to eat and we will deal with that at the time, but, for now we don’t think about that, only savoring these positive, bonus ‘HAPPY DAYS.’  Thanks for sharing our happy story and hope our story may provide inspiration for you and your favorite furry friends who may one day need it. 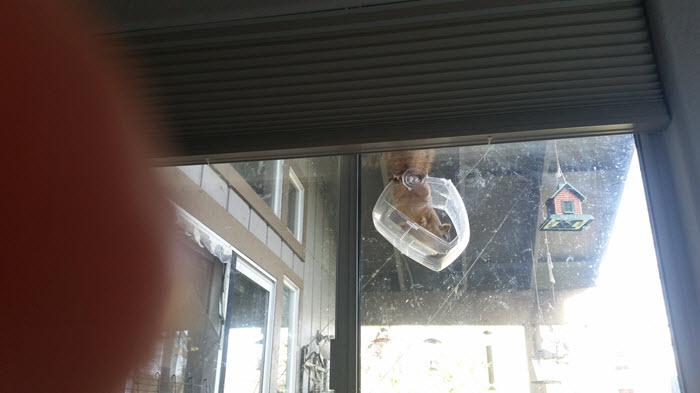 It’s so easy to overlook those people who play a major role in making it all possible for Ornji and others to ‘keep on  keepin’ on.’  That would be the veterinarians, their assistants and staff, medical doctors for us humans along with their nurses and staff, and a special credit to all those unsung people who rescue and save a lot of cats and dogs in the wild who haven’t been so lucky to have homes.  All the above have very difficult but rewarding jobs dealing with the sick but usually seeing them improve and return to better health