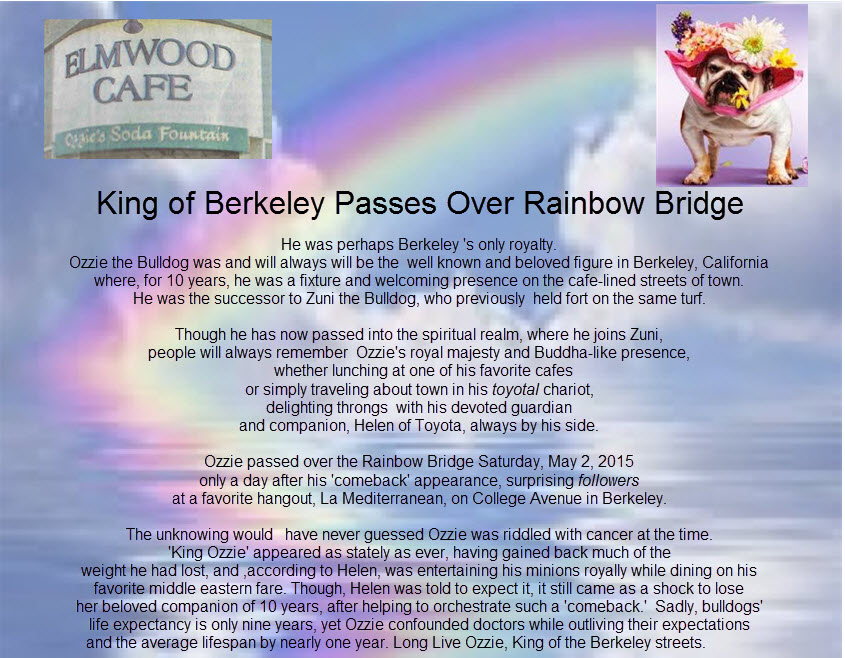 He was perhaps Berkeley ‘s only royalty.
Ozzie the Bulldog was and will always will be the well known and beloved figure in Berkeley, California
where, for 10 years, he was a fixture and welcoming presence on the cafe-lined streets of town.
He was the successor to Zuni the Bulldog, who previously held fort on the same turf.

Though he has now passed into the spiritual realm, where he joins Zuni,  people will always remember Ozzie’s royal majesty and Buddha-like presence, whether lunching at one of his favorite cafes  or simply traveling about town in his toyotal chariot, delighting throngs with his devoted guardian
and companion, Helen of Toyota, always by his side.

Ozzie passed over the Rainbow Bridge Saturday, May 2, 2015
only a day after his ‘comeback’ appearance, surprising followers
at a favorite hangout, La Mediterranean, on College Avenue in Berkeley.

The unknowing would have never guessed Ozzie was riddled with cancer at the time.
‘King Ozzie’ appeared as stately as ever, having gained back much of theweight he had lost, and ,according to Helen, was entertaining his minions royally while dining on his
favorite middle eastern fare. Though, Helen was told to expect it, it was still a shock to lose
her beloved companion of 10 years, after helping to orchestrate such a ‘comeback.’ Sadly, bulldogs’
life expectancy is only nine years, yet Ozzie confounded doctors while outliving their expectations
and the average lifespan by nearly one year. Long Live Ozzie, King of the Berkeley streets.