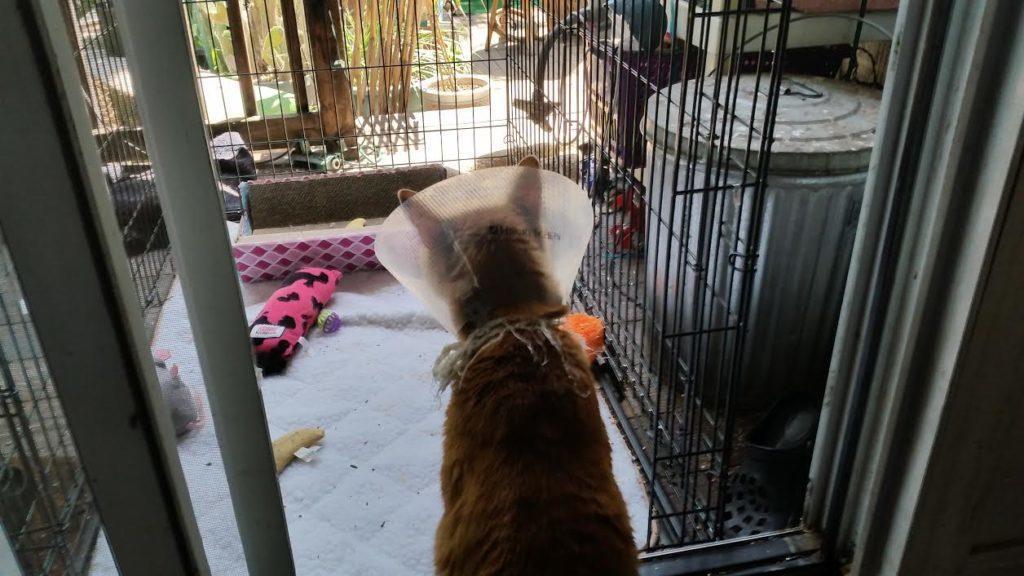 Before  stitches out – Ornji adapted amazingly to cone and stitches. Tried to give him a semblance of life with this outdoor extension where he could literally be outside a bit.. which helped. He never tried to take off cone or stitches out

With little fanfare Ornji had his stitches taken out and his cone removed -the cone was removed only after they told me I could remove it at home and I told them to do it there. Surprized there were no post op instructions so ornji and i’ve had to learn on our own little things that have helped. Didnt even see the doctor. Ornji seems as content as can be and spent the first half hour home eating and  grooming ,making up for 2 weeks without the latter. Still theres an area on his hind quarters where the hair is quite matted from during surgery,for some re ason.   Ornji has just  worked that out, has already gained his weight back, and is basically the cat I knew a month ago.

Even before Ornji got his stitches and cone off, I received a check from our pet insurance, covering nearly the entire cost of surgery, nearly $5,000! Of course, money was not going to be an issue. My people and their health have always come first and I would find a way of paying for such surgeries. But, now we find out that it’s not quite as scary as one might think coming up with the funds to save your precious one’s life. I couldn’t imagine not having Ornji with me today, which could have easily been the case-and is with many people.

I think some pet insurances have gone out of their ways to come up with insurance tailored to major medical.  (Can’t say the same for some human insurances, e.g. dental). So, if there comes a time when your favorite furry friend needs surgery, don’t give up. YOu’ll be amazed. But, better, get the insurance right away so if and when there comes a time your pet will have passed the initial time requirement before claims kick in. Not to name names but I am going to because I’m so thrilled to have it. PET’S BEST Inisurance must truly be the best or one of the best insurances out there for major medical but there are others I haven’t researched.

I think Ornji ,smart cat that  he is, knew all along that this was all sbout making him better. Thus,no complaints putting up with the cone for a full 14 days- or breaking stitches.  How would you like to wear a cone 14 days?  I think cats are much more adaptable than humans and don’t complain as much .  I was so impressed how Ornji figured out how to back out of small spaces and eat and drink with the cone on-of course it helped that I found concave bowls for him to eat out of. I tried hard to buoy his spirit and find the few things he could do with cone on head,like going in the outdoor connection.

So now we’re on to a new chapter with Ornji the full time indoor cat.Hopefully he will take to  that while adapting to another cat in house,perhaps the biggest issue i see since Ornji appears to be a solo/people cat. So far so good otherwise. Ornji seems comfortable now anywhere in the house.

It’s been a real revelation watching Ornji deal with his illness. Cats can be pretty resillient ,thus the 9 lives moniker. With Ornji maybe make that 10 or more. Even the vet staff noted ornji ‘ s special determination and fight. Maybe being a mostly outdoor cat for 3 years helped with that… look for future updates. Thanks for all your support.

Picture: Ornji prior to coming home..  doesn’t jump now but I carefully lifted him on desk to enjoy cat bird seat in window. Got a new cat tree that fits perfectly in window by patio door ,hoping he will eventually take to liking and jumping on…just got it put together in time early morning (without instructiins) to help with the phase indoor adjustment,bringing the outdoors inside.

14 Days Later, ORNJI Gets Rid of Cone, Stitches -All is Great